Hello,
This is my first post. I have looked a lot at these forums and finally decided to join.

I have adjusted the star wheel up and turned the fuel pin some but not all the way. I have not touched the fuel screw.
Has 40+hp Bosch marine injectors currently.

I do not know how many miles are on the engine, but I would guess more than 200K and less than 500K.
It doe not use oil (oil level does not increase from a fuel leak either)
It does not use antifreeze
Zero blow by
Lift pump has 3-4 psi
It will easily make 18 or 20 psi in boost pressure
plenty of power for my needs, Moves the 7600 pound Suburban with ease.
Starts right away in half a crank with no grid heater, as it should

Now here is the chain of events and the issue. A couple months ago it started smoking white smoke, along with a bit of a lope at idle. I checked everything I could think of including cracking each injector line to see if there was a cylinder that was not firing. I could not find anything and it seem to run great except the smoke and the lope. I kept watching it and trying to think of anything I could. It then worsened a bit such that it ran badly when cold but would even out as it warmed up. So I cracked each injector line again and this time I was able to find a couple cylinders that were not running well. So I took all the injectors out and had them pop-tested. All of them were not very good and two were bad. So, found out from a local Diesel shop that to rebuild the stock ones was about $100 a piece and the 40+hp Bosch marine injectors were about $60. I went for the more horsepower. So I got them installed, and at first I thought maybe the problem was solved. It ran better than ever, it had more power than ever, and ran smooth as silk. BUT about two tanks of fuel later (it has a 40 gallon tank) it is smoking as bad as ever, and has a very, very small "lope" again at idle. And as I said it has great power, and does not use any fluids and does not have any blow by.

I suspect it smokes less going down the highway; it is worst right after startup at idle.

Do you all have any ideas for me?
I could only think of 3 ideas:
The injection pump is getting weak- But this seem not likely to me because of how well it runs
Something to do with timing- Perhaps the new injectors are popping off later giving the effect of retarded injection timing? I don't believe the VE pump can slip since it has the keyed shaft.
Something to do with the mechanism for changing the timing to start easily? I think it is called the KSB. But my understanding is that the KSB would not affect anything except starting if it was not working.

Thanks for the help,
Ben H


Another thing. When I installed them, the engine idled slower. So I just adjusted the idle faster. But now I am thinking back on it, perhaps the new injectors are popping sooner effectively retarding the timing, which would cause it to idle slower I believe, or at least it does with a gas engine. Should I advance the timing a little? Or did it idle slower due to the spray pattern from marine injectors? If so, what is happening inside the cylinders? Am i harming anything?

I am thinking cold weather would be bad for the motor with the white haze it has now, unburnt fuel cant be good. 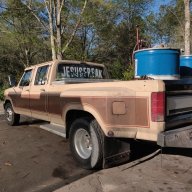 I'm no expert, but I'm becoming infatuated with the timing of diesel engines. If you can, try to check out the timing. From all I read there's a handful of factors that affect the timing and new injectors is one of them.

BenP38 said:
Do you all have any ideas for me?
I could only think of 3 ideas:
The injection pump is getting weak- But this seem not likely to me because of how well it runs
Something to do with timing- Perhaps the new injectors are popping off later giving the effect of retarded injection timing? I don't believe the VE pump can slip since it has the keyed shaft.
Something to do with the mechanism for changing the timing to start easily? I think it is called the KSB. But my understanding is that the KSB would not affect anything except starting if it was not working.
Click to expand...

Old injectors tend to lose pop pressure, so they pop early. This makes for a less 'crisp' fuel delivery. New injectors should be at spec and pop at the 'right' time. If they are somehow set high, they will pop late.

The KSB is a timing advance mechnanism. I forget if its powered for on, or powered for off. The dodge intercooled and non-intercooled ksb's behave opposite. You can experiment with having it connected vs not, or add in a toggle switch. It will probably start reasonably well without it.

Spray angle could be a factor; if the injectors have the wide spray (155 degree) in the smaller 145 degree piston bowl. I dont know your injector specs.

An easy timing advance mod is to rotate the pump toward the cylinder head. (Loosen bolts and use a ratchet strap.) You can normally rotate it past the factory marks about 1/8" . You'll notice the advance most at highway speeds.

Well I advanced the timing. Dont believe it made a difference in the smoke. I still need to get it warm though.

What's the spray angle? Most '370 marine' injectors are 155° and intercooled 12v's have pistons made for 145°. That would mean fuel is landing outside the bowl. I have not tried this combo to know the consequences.

White smoke when cold is common on an aging engine. It normally clears when warmed up. If you didn't have white smoke with the old injectors; then you upgrade the injectors and you suddenly do....

FWIW, My 30yo injectors started smoking super bad at idle - hot or cold. I put in some good used, smaller injectors and now it doesn't smoke at all.

That is exactly what I did. I replaced smoking injectors. I was even getting a miss. The old injectors also tested bad. The new ones cleared up the miss and it runs better than ever. Except it still smokes. And Yes from what I am learning looks like these have a 155 deg spray pattern.

I would not be surprised to see a bit of white smoke at first startup that goes away after a few minutes. But this is a lot of smoke. More than it did before the previous injectors went bad. I think it does not smoke after warm since I advanced the timing. But it did smoke when warm before I advanced the timing.

I have 2 other 7.3 IDI Fords. One has low compression and I really don't know why it runs at all. The gauge said something like 125-150 psi. It smokes no matter what obviously. The other only has about 120k on it and is in really good shape. Puffs a little at startup, but never otherwise. That is what I would expect from a mechanical diesel.


I have 3 questions:
1. the timing advance did seem to help I think once it was warm. Would this simply be because there is more time to burn, so even a bad spray angle works?
2. will I hurt anything with theses injectors? Do I need to get some 145 deg injectors right away? will I have an increased chance for cylinder washdown? I do let it idle in the winter sometimes to keep things warm; it is out family car.
3.Do you have any suggestions for the best injectors to get? I would want a 40 or 50 + horsepower, and I don't want to spend an arm and a leg. But at the same time I want best choice more than I want power and more than I want to save dollars.

I run a correct angle version of the 'marine' injector in my '93. Holes are 5x.012" . I also like the stock non-intercooled inector in my older trucks but doesnt fit in the intercooled cyl head.

I'm on the fence wether to try some ebay injectors or order a set from the DAP guy on cumminsforum. Not in dire need of any just yet.

Ok,
So I called the diesel shop i went to and they say that these are indeed 155 spray angle and that that is what they have been using for years in these trucks. They also said that it was the same as what I had before, which i am not so sure about.

Dynomite Diesel says that everything sold for these trucks is the 155 spray pattern now and that it wont hurt a thing.

Hungry Diesel was the most helpful. He says that some trucks will work ok with the different pattern, but lots just don't. The non intercooled trucks would have the 155 pattern, intercooled will have the 145. But you have to be carful, because a non-intercooled truck, may have received an intercooled head, so just injector hole size is not a dead ringer for what the pistons are.

I think I believe Hungary Diesel. I have a feeling I will be saving these ones in it now for emergencies. I am going to make some more checks and we shall see.

Let me know if you all have any other thoughts.

Another thing with white smoke.... If compression isn't quite up there when cold, the cylinder may pass the fuel charge instead of burning it.

I had a powerstroke that was a fog machine when cold. I suspect its hours were much higher than the odometer suggested; and thus quite tired.

I would agree about the compression. But if I had poor compression (or even just less than it should be) don't you think I would be getting some blowby?? that was my thought anyway and why I sort of ruled it out or the moment. But I could be wrong.

My nephews have a 5.9 with the P7100 pump. It has a little blow by, but no white smoke. Plenty of black if grab a high gear and put the pedal down, but that is because it is turned up for power.

Yes blowby. Are you checking for it while cold and puffing white?

More info. I called Cummins, and per my serial number, I should use Cummins injector kit 3802246RX. I believe that would be injector 3918965. That is what the nameplate says also. But they could not tell me what spray angle that was. I googled it and found a Bosch cross reference PDF. It seems 3918965 is Bosch 0 432 133 877. After further googling I think that is a 145 degree injector for the intercooled trucks.

Nozzles and bodies can be mixed and matched. My nozzles had a faint laser-etched 4-digit number on them. (No need to take the injector apart.)

I can try and cross check your bosch numbers later this week.
You must log in or register to reply here.