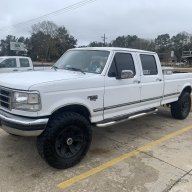 I'm chasing a ghost problem with my truck and want to see if anyone might have a motor available in case I need to just swap my motor out. I live around Baton Rouge, LA and want a reasonably low mileage 7.3 diesel.

I have a thread Called billowing white smoke. I have a bad coolant leak into the oil. Good cooler, good front cover. No one can figure it out 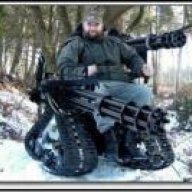 Suspect you have a blown head gasket. Start the engine, take off radiator cap, Look for coolant to surge or bubbles as you rev up the engine. When engine is running, combustion gasses have a lot more pressure than coolant can handle, it will cause the coolant to surge up when you accel above idle.
When engine is shut down, coolant leaks into cylinder and finds it's way to the oil pan, thus coolant in oil.
The white smoke is likely coolant blowing out exhaust, in form of steam.

The it was not blowing coolant out the degas bottle when running. And when I pressurize the coolant now with no oil in the pan it will start running out the plug in seconds and be a steady stream. A small stream but a stream nonetheless. 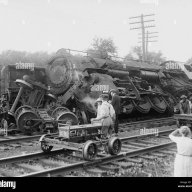 Kraig said:
The it was not blowing coolant out the degas bottle when running. And when I pressurize the coolant now with no oil in the pan it will start running out the plug in seconds and be a steady stream. A small stream but a stream nonetheless.
Click to expand...

Another possibility is a cracked block.

I'm starting to think a cracked block. But how is the question. I have had such bad luck with 7.3s lately. I just put this 225k mile engine in this truck last year.

Have you done a compression test on the engine? If you have one low cylinder, it could indicate a head gasket leaking.
Water in the combustion chamber will make white smoke, it's getting there from somewhere, where.
You are getting water in the pan, at a pretty good rate... shouldn't do that either.
Possibles:
1. Head gasket leak
2. Water pump bolts not sealed.
3. Engine oil cooler leak.
4. Cracked block .... Pretty not likely.

One of my trucks [92, 7.3, last owner put a turbo on it] has a blown head gasket. It blows bubbles and surges coolant with radiator cap off, it also blows white smoke [steam] out the exhaust like crazy.
Been crazy busy so have not torn the engine down to fix it.. It has 285,000 hard miles from previous owner and needs a complete rebuild... I'll "get to it someday soon"....

Thanks, now that I know the truck is a 97, that helps me try to figure out your problem with the truck.
I forget, in 97, did Ford still route the injector wiring harness under the valve covers?
Late 94 & 95 did, and heat and oil inside the valve covers often damaged the injector harness, which would cause injectors to fail in weird ways. You could have two separate issues [it happens] , One, an injector failing to open and spray as it should, which could cause intermittent white smoke because the fuel mix is off, [if it was holding open to long, it should roll coal smoke, so I'm thinking an injector or two is running lean.
Second issue is your water leak, from somewhere. New oil coolers can fail, same as old ones, so I wouldn't totally discount that possibility... If you are pushing water into the oil, and the high pressure oil pump that makes high pressure oil to open and close the injectors when the computer tells it to, might be trying to "pump water" which does NOT compress, into injectors, and be making a "white smoke sometimes" problem. [just trying to think through all the possibilities].
Water in oil or water in fuel is never a good thing for our diesels. Thanks for the challenge of trying to figure what may be causing your problems.
"Bring the truck a little closer to the computer so I can get a better look at it.. " )

I wish it wa that easy!! Lol. Also I filled the oil cooler body with water and plugged and pressurized each tube like an industrial exchanger. No bubbles. So I know at least the body is good

And both oil coolers behaved the exact same way. So I think it unlikely that they are both bad.

This is how far we got on another thread.

I have had an intermittent billow of white smoke while driving around. It would happen once a day maybe but right as I got off the interstate this morning after an hour it just let loose billowing white smoke. I did pull the injectors a few weeks ago so I though maybe an injector Oring. I pulled...

Finding the right answer in this case will be like losing a set of car keys... you will find them in the last place you look.... )

It troubles me that you are getting a flow of coolant into the oil pan, enough to see it running out the drain plug is HUGE amount... BTW, water is not a good lubricant, and it will destroy rod and main bearings for lack of oil. So that issue needs to be cured ASAP.

If the HPOP [high pressure oil pump] is sucking up a bubble of water and sending it to an injector, that bubble of water will act as a dam [or in this case a "DAMN"] which blocks fuel from spraying out the nozzle, which makes that cylinder run lean, which makes white smoke.... after a while, the water works it's way through the nozzle and you get fuel to that cylinder again... so you get combustion.
[again, just thinking it through, as a possible.]
That "might" account for intermittent white smoke. Try this, if it makes white smoke while setting and running, hold a sheet of white paper about 2 inches from the end of tailpipe.... if it's water vapor, the paper will get wet.. if it's fuel vapor, the paper will get oil spots held by the white paper.. and you can see them... Might help define what is happening...

I am so confused by this. I am so over ghost problems. I am ready foe a "regular 7.3 problem"!!!
You must log in or register to reply here.