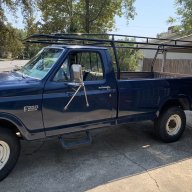 Hard to believe its been almost 10 years ago I rescued this old 6.9. It started out as the project, and now it does projects. Bought it on eBay with a cheap paint job over bondo+rust, for less money than it cost to fly to fly me+bother-inlaw to pick up the ex farm truck in Colorado. Balding Tires and it only started with ether (I know, I know) - it amazingly ran all the way back to CA. I spent the first years learning about difficult vacuum problems, glow plugs and the like. Then I located and replaced the F/A separator - instantly became reliable. There is a long, long journey through many of the truck's systems... from replacing the starter cables to brakes to air conditioning to steering to fuel tanks/senders and more. But my old hands have started to give up so I do less and pay for more... Shifts like a pissed off mule when cold, so we suspect a shift kit in the C6 - so I'm not the only one to give it some attention. We'll keep it rescued, ugly, and on the road.

This is a return to OilBurners for me, though it has been quite some time. The vacuum problems have returned, likely because its seen some jostling given the services its had... and I have to remember the old sequence of diagnosis... which I know is in the posts here. Want to give thanks to all that helped me previously, and in the future.

Future stuff: Fix the vacuum leak, "crisp up" the accelerator linkage, conversion to electric fuel pump, new standyne + injectors, and turbo the thing for another 100+100 - not a lot, enough. Also, I've decided I hate my replacement plastic tanks, need to replace all the fuel lines/switch anyway so will replace them with steel units in a 19+38 config.