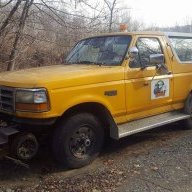 The other day my motor made a bad noise then just shut down while climbing a hill. I was able to get it to restart in high idle after letting it sit for a bit but but it wouldn't stay running and sounded like ****. (wasn't overheated) Also the engine was showing no signs of going bad leading up to this.


Got it towed to a shop and they say my crankshaft is ****** and I need a whole new motor. ($10,000) had a 2nd shop give a quote for $12,000 for a new motor but couldn't look at it to see if it was something else because it's stuck at the other shop. But I do have a feeling that's their "I don't know what's wrong, and I don't want to spend the time to figure out what's wrong estimate" Because it was dropped off after hours and I showed up 1-2 hours after they opened the next morning and they told me this.


Problem is I don't have that kind of money and I really need the truck and all my tools back on the road since trucks around me are are listed at around $7500 with a blown transmission or a frame that's about to snap in half from rust.

The truck is 98% rust free and I would hate to scrap it because of the motor being blown. I also just rebuilt the whole front end and did a bunch of work on the motor. new turbo, and fixed a broken injection stepper motor. Also TONS of electrical fixes and improvements. Engine was always smooth starting and smooth sounding.

From digging I find the 6.5L are hard to find and when you do find them they are ungodly expensive. Only place I know of I haven't checked yet is Jasper Engines but their website is screwed up at the moment and I have no hopes of anything different from them.

I was wondering what options I have (that are relatively simple.)

Is there another engine that's more common and cheaper that is an straight bolt up with no or minimal modifications?

Or is there a common failure with these engines that causes this and that is repairable that I can look for?

Imho, reman or used engine with a warranty.

Would consider a 6.2L, V8 gas w/carb, or cummins if it's a 5speed. Afaik, the auto trucks have a unified ecm that controls the engine and trans together.

Reman and used are what I have been looking at. Been eyeballing a few junkyard engines but I feel they are a crap shoot.

The truck is an automatic. Would prefer not switching to an gas engine. Love the sounds of a Cummins but like I said it’s an automatic not a 5 speed.

You can get warranty at the better recyclers/junkyards. The place I worked at did test runs w/comp tests and 90 days warranty.
W

12V Cummins and matching transmission. It would require modification to the driveshaft, but that's not a big deal.

WECSOG said:
12V Cummins and matching transmission. It would require modification to the driveshaft, but that's not a big deal.
Click to expand...

Is there a exact block and transmission to look for? And what type of shop would do drive shaft modifications?

I’m currently trying to keep the bill at or below $6k because that’s all the money I have.

$6k can get eaten up fast. Depends on what you can get your hands on. I have scored 89-90 cummins trucks for $1k and under, but an engine by itself often costs 2-3x that. Shorten/balance a driveshaft can be a $200 affair. Usually more to lengthen.

I would shoot for a 89-98 cummins with a 5 speed. If this is a C3500HD (beam axle) the swap might be bit easier. Another factor is axle ratio as the cummins doesn't rev to 4k,
W

Dylanviey said:
Is there a exact block and transmission to look for? And what type of shop would do drive shaft modifications?

I’m currently trying to keep the bill at or below $6k because that’s all the money I have.
Click to expand...

'94 to '98 would be the best to look for. The engine is not computer controlled. Manual transmission would be NV4500 in those years, if you want to swap to manual. The auto trans would be a 47RE. It is computer controlled, but you can get a stand-alone controller for it.
For the driveshaft, I would just try to get the one from the same Dodge that the transmission came from. Measure its length and the length of your original, and take it to a machine shop if the length is different. A machine shop in a farming area would probably be familiar with doing that sort of work.

Everybody wants the 94-98 p-pump engines so they're priced accordingly. The 89-91 without the intercooler are the best value imho.

But it might be your cheapest most reliable route that will bolt in....? And get you back on the road the fastest. Otherwise going off of memory, the earlier GM castings without the oil squiters were stronger. Finding one of those in a junkyard that offers a warranty is another good option as @u2slow mentioned.