I have a 1987 GMC 5500 Forward box truck. It has the Isuzu 6BD1 diesel (non turbo) with a 5 speed manual and has clocked about 235,000 miles. I have owned the truck for about 25 years and in those years it has been driven very little, probably less than 1000 miles per year on the average, therefore obviously it sits idle a lot. On my most recent trip it began randomly missing and sputtering to the point the engine died. It acted as if it was starving for fuel or had air being sucked into the fuel system. The first case was under load pulling a grade at about 40 mph. The truck would not restart. I changed the fuel filter on the engine, which was in bad shape, and replaced the diesel in the tank with a fresh 10 gallons. I also cleaned the filter at the lft pump and cleaned the oil/fuel separator between the tank and the lft pump. The truck started and ran about 30 miles at highway speeds then stared sputtering and missing and died again. This time after about 5 minutes the truck restarted, ran another 25 miles or so anddid the same thing. This time the truck was much more difficult to start but when it did I was able to nurse it home, about 5 miles with no issues. I then adjusted the valves (which I had never done as part of a service) replaced the lift pump with an electric model, bypassed the oil/fuel separator, flushed the fuel tank again and replaced the diesel with another fresh 10 gallons. On the first test run the truck only managed about two miles before it tried to die and I turned and headed back home. After another review of the fuel system I thought I had a small pinhole in a metal fuel line from the lift pump to the filter so I replaced that and inspected the other lines for potential leaks that might allow air into the fuel system. The next trip I made it less than a mile and no start after it sat for several hours. Towed home that time. Next the engine died sitting in the driveway after idling for 20 minutes. I went through the fuel return lines and took another test drive. Everything was fine until I got on the throttle a bit. Then it sputtered and died once again as starving for fuel. I checked the air cleaner and could see a flashlight through the element however I noticed a coating of wet black material, either oil or diesel and soot/carbon on the air intake pipe. The exhaust pipe has had a similar material appear in it over the years. This whole issue started after I got in and drove the truck about 50 miles after it had been sitting for 18 months and then fuel it with 20 gallons of fresh diesel. No matter what I have done the problem is not effected it seems. Any help greatly appreciated!! 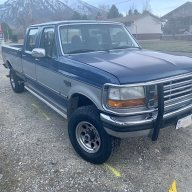 I happen to have one of those motors, but it’s not been installed yet.

Such a dead simple motor. Is it possible that the fuel shut-off (solenoid or manual?) is letting go after it gets warm?? I’m scratching my head because you have really covered your bases on the fuel system.

I have seen a completely new fuel system (tank, pump, filters and all) become contaminated when rust in the hard lines broke loose and wreaked havoc.
T

I’ve got a few Isuzu engines in generators at work. Mine are the 4BG1, but they are similar I believe. One of the sneaky things Isuzu did was add check valves and filter screens in several of the banjo bolts. I had fuel starvation issues on one unit that turned out to be a valve in the return line at the fuel filter. It was the smaller filter up by the front of the engine. One of the fittings on top has a small banjo fitting and bolt that screws into a larger bolt which holds a larger fuel line. That larger bolt has a steel ball held down by a small spring. On mine, the spring had rusted and broken, and the ball wasn’t sealing. That allowed fuel from the lift pump to head straight to the return lines, and give little of no fuel to the Injection pump.
You must be registered for see images attach
Key no. 10 was the culprit for me. This one stumped me for a couple of days. It may not be your problem but I figured it couldn’t hurt to mention it if it’s something you hadn’t checked.
You must log in or register to reply here.
Share:
Facebook Twitter Reddit Pinterest Tumblr WhatsApp Email Share Link