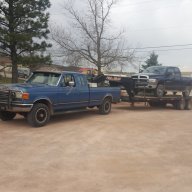 Ok so it’s been a while, I started on my old trusty blue truck a year ago, bought a low mileage parts truck and a new bed with the intentions of putting my progress in a thread like a year ago….aaaand life hit my shops been swamped the parts store Is busier than ever, and farming season has been absolutely insane…. Anyway it got put on hold but part of that crazy life is my personal business working on diesel pickups. Mainly powerstrokes. Which brings me to today’s post building an engine stand that is not sketchy to hang Cummins, Duramaxes, Powerstrokes and even our IDIs.
I was about to buy an OTC rotating stand for 1500 then I came to reality. I can build one!

the best part is this stand will bolt to the sides of the block rather than the back. A necessity for working on powerstrokes where the gear train comes out the back. And Cummins where there is 30 feet hanging off the bell housing…

I have the frame built in the pictures below and less than 500 invested and maybe 3 hours and a six pack to get to this point. The most difficult was getting the rotating head figured out. Not too shabby for anything more than a napkin sketch and a late night hair brain idea!

it’s not completely finished but I will keep you all posted on it’s progress and performance when done as well as a material list and better measurements for any who want to copy.

Beginning of the rotating head

The gear drive coming together

And the last of the progress I had last night

I should also note, I made one end of the stand sliding and Removable, that Way it can be narrowed up to hold a Cummins without having a ton of stick out on each side, or removed if I want to use it as a conventional engine stand.

I got the rotating head made up last night. I used a piece of 1/2 plate I had laying around and the 1 1/4 hitch pin for farm equipment. Simple piece hole saw through the plate set the pin and weld. That’s about as much as I got done last night…. Been fighting with another truck and just needed a quick break…

now I’m waiting on two more bearing flanges for the other side and I can get it put together. The fun part will be making the engine adapters lol

Got a little more done last night. The head on the tail stock is just tacked in place. But the bearings ar mounted. I need to cut the hole in the center of the next head plate so I can weld in the pin. Then all that’s left is to bolt some channel to the bottom of the slider rewords the back so it can’t tip forward with weight. Then the fun part of building adapters for the different engines! First up will be mounts for a 6.4!