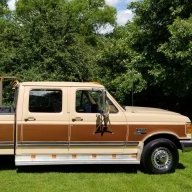 So this is actually in my 90 F150 with a straight six but it's the same components short of the compressor being a different type of mount so I'm asking here anyways as it should be the same if this was on an IDI. My one truck (Fred in sig) sits all winter, it was my grandpas truck and I won't drive it in salt, I don't even like driving it in rain anymore so that may contribute to this. It has an AC system out of an 89 I installed in it. I took the whole thing out of the 89 as 1 unit still sealed up and plopped it all in this truck and it's worked great. It was already converted to R134, no complaints.

The other day this week it was 97, I drove it to work and on the way home I only felt "cool" air coming out, just didn't seem right for it as it's traditionally been one of the coldest AC systems I've had no matter the temp outside. I wondered if it had lost some gas sitting all winter but when I checked it was fine. I hooked up the gauges and noticed the high side was too high from what I'm used to seeing (340psi) while the low side was 40. I figured maybe the orifice tube was clogged or restricted, so I dumped the system and took out the blue tube, it was pretty gross had a lot of green goop on it but no metal flakes or anything. I put a new blue orifice tube in, vacuumed it and verified it held and filled it back up. It seemed like it worked a little better but I noticed the drier (canister by low pressure port, that's what I call it anyways) wasn't sweating. Didn't make sense.. I drove it that night and it felt a little better the longer it ran but drier was still barely cool to the touch. I ordered another one but it's not here yet. Then, fast forward to today. It's 88 here so not quite as hot but I drive it home from work at lunch time and it's back to blowing legit freezer temp feeling air. Drier is sweating like you just got out at the orlando airport.

What do you think happened? Just random junk stuck in the drier from sitting all winter? Everything I did had 0 effect and it would have been fine anyways? Whatever was stuck is going to get stuck again? One thing I should also mention that I checked every time during this was that the clutch was actually engaged and spinning, it wasn't cutting out from low pressure or a random electrical issue.

I don't want to put this new drier on and do all of this again unless it quits working, but I'd like to at least get some educated opinions as to what may have happened on the chance it does quit in case replacing the drier has no relevance.
Last edited: Jun 24, 2022
F

Check the air gap on the clutch. I had random cooling issues with my truck, and it turned out the clutch gap was too wide. Sometimes it would kick in and drive the compressor, sometimes it would not. I pulled it apart and took one of the shims out. 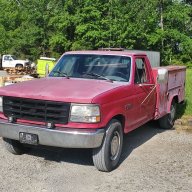 If your blockage was from sitting I would be worried your problem will reoccur. I would want to flush the system out, especially from the office tube back to the compressor. Re-inspecting the orfice tube will give you some clue as to how much contamination is in there. It effectively acts like a filter.

Yeah, I guess if I have issues again I should in theory see it there since the screen on the old tube wasn't broken. I almost wonder if some of the goop didn't come out when I pulled the old tube out and I effectively shoved it under the new orifice tube and it took some time to work it's way through the drier and around the system before it spread itself thin.

I'm not opposed to doing things right here if I have to fix it, I just don't want to go through any of it for nothing now that it worked well today for essentially 2 hours on three different longer trips in between some shut downs. I'll just have to keep an eye on it. Given that I drive this truck pretty much from summer when spring rains are over until fall when they start, it gets the hottest worst weather to deal with 95% of the time it's on the road it's 80+ and miserable June - September.

If you were seeing 340 lbs it seems that your clutch is holding.
F

gnathv said:
If you were seeing 340 lbs it seems that your clutch is holding.
Click to expand...

It will hold IF it pulls together. The gap gets so wide that it gets intermittent and won't pull it together everytime. It's a very random thing, but if it's not cooling again, stop and jump out and lift the hood to see if the center of the compressor is turning or not.

At 340lbs, there’s a restriction 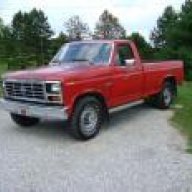 High head pressure is either a restriction or lack of air flow across the condenser.

Another thing that should be noted that if its an R12 system running R134a it takes less R134a so if you charged it to the R12 weight it will be over charged.

The low side was 40, that doesn’t correspond to overcharge or blocked condenser.
Last edited: Jun 26, 2022

franklin2 said:
It will hold IF it pulls together. The gap gets so wide that it gets intermittent and won't pull it together everytime. It's a very random thing, but if it's not cooling again, stop and jump out and lift the hood to see if the center of the compressor is turning or not.
Click to expand...

I believe some clutches are adjustable via shims (Not sure on these trucks.), since mine was new I returned it for another one that worked.
T

That's an interesting failure. The fact that the accumulator-drier was not sweating indicates that there was too little liquid refrigerant entering the evaporator. All of the liquid going into the evaporator was boiling off and only vapor was reaching the accumulator. Normally that would be indicative of a low charge; or a blockage in the orifice tube. However, the 40 PSI low side seems to contradict that.

The fact that it resolved its self is what makes it unusual. You mention green goop on the screen. That makes me wonder if possibly someone put sealant in the system in years past; and the sealant congealed in the liquid line before the orifice tube. That is one possibility; which might resolve its self.

The high side at 340 indicates that the condenser temperature is very high. I wonder if the fan clutch is working correctly? Although that might not explain poor performance at road speed. It does take much more airflow to cool the A/C than it takes to cool the engine. So if the fan begins to slow down, often the A/C will show signs first before the engine overheats.

When you took the pressure measurements; was the engine at low idle? Or at a higher speed? How hot was the liquid line just before the orifice tube?

It was idling at that point. I'm not going to promise the fan clutch is working properly but I believe it is and I also have a big electric helper fan on half the condenser. Previous truck had it on the trans cooler and I just moved it over to this truck to turn on from a relay when the ac is running.
F

I believe some clutches are adjustable via shims (Not sure on these trucks.), since mine was new I returned it for another one that worked.
Click to expand...

They do have shims behind the clutch hat after you take the nut out of the middle and pull the hat off. Going from memory, the spec for the gap has a lot of latitude, something like a low of .015 to a high of .030. Most people with problems take out the thinnest shim that is already in there and then try that.
You must log in or register to reply here.